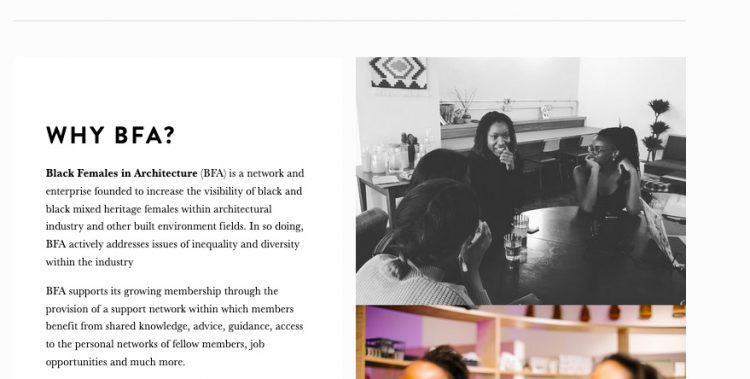 Women to the front!

Architectural education and practice continues to be dominated by men. Although many more women are now studying and practicing architecture, we are still under-represented at senior levels, and our design schemes, research and publications less likely to be cited, and more likely to be forgotten over time. Women of colour remain even more severely disadvantaged.

But through inventive collaborations and by building networks and using crowd-sourcing and other generative and emergent methods, women across the world continue to fight back. Here are just some examples, and we would love to add more:

BFA was founded in the UK to increase the visibility of black and black mixed heritage females within architectural industry and other built environment fields, and to challenge ongoing inequalities across sector. It has a strongly developing membership, with over 300 members, who network together to enable shared knowledge, advice and guidance, as well as linking into job and other opportunities.

Voices of Experience is a project led by Suzanne Ewing, Jude Barber and Nicola McLachlan that aims to challenge the lack of recognised female presence and role models within architecture and the build environment.  It does this through enabling a series of conversations between a highly experienced architect or maker of the built environment, and an architect or other professional at the outset of their career; slowly but surely building an audio archive around females working in the late twentieth century Britain .

W@ARCH.PT is a research project being developed at the University of Lisbon, to write the diverse stories of women in architecture. This is because, as in other international contexts, the history of Portuguese architecture has been built by omitting women architects’ presences and contributions.

In 2017 Harriet Harriss initiated a crowd-sourced Women Who Write Architecture list to challenge the continuing tendency for reading lists in the built environment disciplines to be largely dominated by male writers. This, she suggests, perpetuates the assumption that it is male voices and activities that have authority.

Parlour has created a public register of women in Australian architecture and the built environment disciplines – Marion’s List – responding to the tendency for speakers, panels and critics to be predominantly male; and undermining the argument that this is because there are not enough women available. The list brings together women who have signed up with anyone looking to expand the range of people in public talks, juries, or teaching, or to contribute expert commentary or input.

Part W is an action group of women, based in the UK, working across architecture and design, infrastructure and construction and campaigning for gender parity across the built environment.

The first – and ongoing – public action is The Alternative List which uses a variety of creative methods to celebrate women who have consistently been overlooked and unrepresented in architecture; centred on entering women in the Royal Institute of British Architects (RIBA) Gold Medal, which sinces its inceptions in 1848 has been awarded to only one woman in her own right, and three husband and wife teams.

The Bloomsbury Global Encyclopaedia of Women in Architecture 1960-2015

This is an international project (forthcoming 2021) which will bring together 1200 entries on women architects and on women active as architectural educators, journalists, policy makers, theorists, historians, activists and urbanists to map the ways in which diverse women have shaped the global built environment over the last five decades. The two editors are Professor Lori Brown, Syracuse University, and Dr Karen Burns, University of Melbourne, supported by an international Advisory Editorial Board, and eleven Area Editors. The Editors and Bloomsbury envisage the Encyclopaedia as an on-going project, with editions and revisions in the years to come.

Women Architects and Modernism in India

We would love to hear from you with examples of such creative collaborations, that we can share here. Or do you have an idea for a collaborative project that links to MOfaa? You are welcome to get in touch, via the Contact page to discuss.